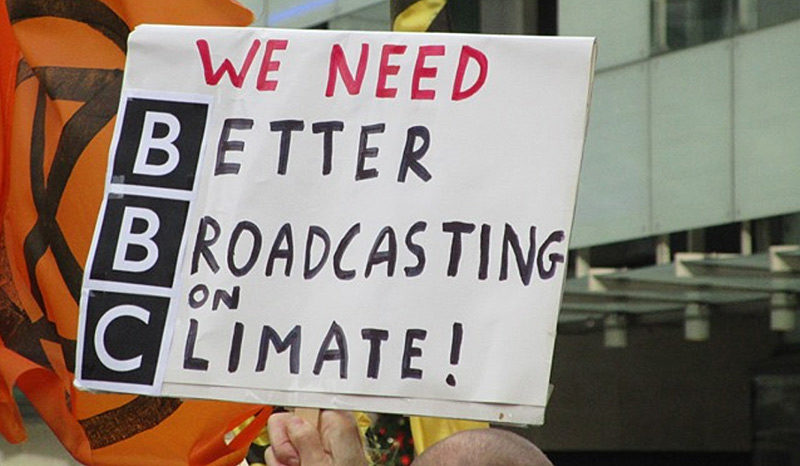 “So that we can face this emergency together”

This Friday 21 December Extinction Rebellion will stage a day of peaceful protest, mourning and mass peaceful non-violent direct actions at BBC locations in London, Manchester, Sheffield, Bristol and Birmingham to call upon the BBC to acknowledge its public-service duty to recognise and act on the climate and ecological emergency. [1] [2]

The news comes as representatives of Extinction Rebellion today hand delivered a letter to BBC Director General Tony Hall requesting an urgent meeting concerning “how the corporation can meet its crucial moral duty to tell the full truth on the climate and ecological emergency”. The letter also urges the BBC to step up “in enabling the transformative change needed so that we can face this emergency together.”

“We know there are many good people in the BBC. This is not about shaming people but it is now beyond time to ensure the entire organisation puts tackling the threat of human and natural extinction at the heart of the BBC’s programming. The BBC are crucial to providing the social permission for the change to sustainable low-carbon lifestyles and businesses,” said Donnachadh McCarthy of Extinction Rebellion and the Climate Media Coalition.

“It is becoming increasingly clear that the adults of today will be asked by their children’s children – what did you do when there was the climate and ecological emergency. As such we are reaching out to our friends at the BBC to step up and help us all create a better and more caring world. The level of unprecedented societal change required to avoid the worst consequences of climate breakdown, means the BBC has to go far beyond even that of the public service role the BBC played during WW2.“

Extinction Rebellion Letter to the BBC
The letter lays out an eight-point plan about how the BBC can begin to meet its public service remit in light of the climate emergency. It states:

“As the latest IPCC report makes clear, the current threat posed by climate change to all life on the planet is immediate and unprecedented in the Earth’s history.

“Speaking at COP24 in Poland, your very own David Attenborough said: “If we don’t take action, the collapse of our civilisations and the extinction of much of the natural world is on the horizon. The world’s people have spoken, their message is clear, time is running out, they want you, the decision-makers, to act now.”

“We see that the BBC, as a respected media voice in the UK, needs to play a key role in enabling the transformative change needed so that we can face this emergency together.

“1. The BBC Director General Tony Hall agree to a meeting with a delegation from Extinction Rebellion to discuss how the corporation can meet its crucial moral duty to tell the full truth on the climate and ecological emergency. Including especially the current perilous failure of the Government to take appropriate action.

“2. The BBC declares a Climate and Ecological Emergency – we need to act now, the extinction of the natural world is happening and we face the collapse of our civilisation.

“3. The BBC places the climate and ecological emergency as its top editorial and corporate priority – integrated into all of aspects of the BBC’s output, not just environmental sections – by adoption of a climate emergency strategic plan, at the level of urgency the corporation placed on informing the public about World War 2.

“4. The BBC to divest all pension funds, investments and bank accounts from fossil fuel corporations and their bankers.

“5. The BBC, its subsidiaries and its supply chain to agree to be zero-carbon by 2025.

“6. The BBC to publish an annual eco-audit of all BBC operations, including summary of key ecological and carbon data.

“7. The BBC to take a lead on encouraging other national & global media corporations to join the global efforts to save humanity / nature from existential crises.

“8. The BBC to only allow think-tank spokespersons or lobbyists on-air to discuss the climate and ecological emergency whose funding is fully transparent.”

This Friday – Reclaim the BBC – London, Manchester, Sheffield and Bristol

In London the day will be family friendly with a full agenda of activities – from 10.30am to 5pm, meet at All Souls Church, Langham Place, follow twitter for updates. Events includes protestors staging a memorial marking the horrific deaths of the 27 people found burnt together at the Greek village of Mati in July’s wildfires, as well as all of the 315,000 people the UN estimates are already dying every year from the unfolding climate emergency. [3] There will also be protests at the BBC offices in Salford, Manchester, Sheffield, Bristol and Birmingham.

“The first demand of Extinction Rebellion is “That the Government must tell the truth about how deadly our situation is, it must reverse all policies not in alignment with that position and must work alongside the media to communicate the urgency for change including what individuals, communities and businesses need to do.

“This is why we are proposing that the BBC urgently places the climate and ecological crises at the centre of its strategic corporate and editorial objectives.”

The Road to International Rebellion

The BBC protests feature as a key part of the build up towards International Extinction Rebellion Week, which will take place globally beginning 15th April 2019. News has also just been released that Extinction Rebellion activists in the USA are preparing for a National Day of Action on 26th January 2019, for what they dub their ‘Rebellion Day 1’.

2. The BBC has a turnover of over £4.7 billion per annum, with approximately £500 million on deposit at any one time. It is essential that the BBC ensures that this is lodged with banks that are free from loans to the fossil fuel, fracking or high carbon industries

3. Over 80 people were horrifically burnt to death in this year’s wildfires in Greece, including 27 people found together in the village of Mati, many of them relatives and children.

A UN report states that over 315,000 people are already dying annually from the impacts of climate breakdown.

4. About Extinction Rebellion
Time has almost entirely run out to address the ecological crisis which is upon us, including the 6th mass species extinction and abrupt, runaway climate change. Societal collapse and mass death are seen as inevitable by scientists and other credible voices, with human extinction also a possibility, if rapid action is not taken.

Extinction Rebellion believes it is a citizen’s duty to rebel, using peaceful civil disobedience, when faced with criminal inactivity by its Government.

The group’s key demands are:

The Government must tell the truth about the ecological emergency, reverse inconsistent policies and work alongside the media to communicate with citizens
The Government must enact legally binding policy measures to reduce carbon emissions to net zero by 2025 and to reduce consumption levels
A national Citizen’s Assembly to oversee the changes, as part of creating a democracy fit for purpose.

About RisingUp
Extinction Rebellion is an initiative of the RisingUp network, which promotes a fundamental change of our political and economic system to one which maximises well-being and minimises harm. Change needs to be nurtured in a culture of reverence, gratitude and inclusion; whilst the tools of civil disobedience and direct action are used to express our collective power.